Here is an instance where man is a dog’s best friend!

After a few thousand miles of cruising on their 60 foot Jefferson Marquessa M/Y OLOH, owners A.J. Hammer and Tim McFadden, his partner, identified her stability in beam and following seas as something they hoped could be improved to increase comfort and enjoyment on their boat.

When the OLOH was built in 2004 she was equipped with WESMAR hydraulic stabilizers and a WESMAR bow thruster. A previous owner also had a WESMAR stern thruster put on. The couple acquired her in 2017 and have been making continuous improvements ever since. When Tim began exploring the latest in stabilization technology he became convinced the comfort of the vessel could be enhanced.

After studying several alternatives together, they decided the best option would be to update the existing system. After thoroughly discussing the issue with Jim Monroe of Yacht Equipment & Parts (YEP) in Ft. Lauderdale, a WESMAR dealer, both felt confident that Jim’s team was the one for the job.

The transition to a smoother ride was simple in concept. It involved replacing OLOH’s 4.5 sq. ft. fins with a set measuring 7.5 sq. ft. The smaller fins were originally installed based on the boats optimal 18-knot cruising speed. The larger fins are much more suited to the preferred speed of 10 knots. It also included installing WESMAR’s new DSP5000 Wave-Smart® 3-axis gyro. This provides highly accurate real time control feedback for roll and horizon on a continuous basis, and addressed what Tim identified as needing improvement. Aside from remaining stable underway, in hard turns, and as speed decreases, the gyro’s continuous feedback can provide on-land stability and a great degree of comfort at anchor.

“Our real-world sea trial with the WESMAR stabilizer arrived when we were running offshore between Miami and Marathon. Most of this 98 nautical mile run is in the relatively protected Hawk Channel and the forecast was for a light chop but that turned into unanticipated swells on our beam of up to around four feet, conditions which would have ordinarily turned OLOH into a giant pendulum with our previous stabilizers. We were thrilled when it occurred to us that while the conditions were less than pleasant, OLOH was maintaining its proper level and staying STABLE through it all.

Wahoo! Victory. We knew then and there that this was one of the single greatest upgrades we’ve made and, at least in this instance, the improvement seemed to be everything we hoped it would be and perhaps even more.  When we’re cruising, nothing is more important than the safety and comfort of those aboard and our stabilizer upgrade was a giant leap towards that end.”   Captain A.J. Hammer 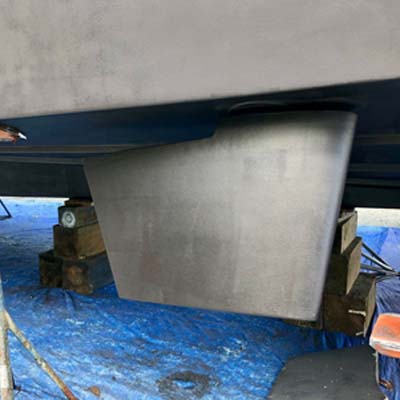 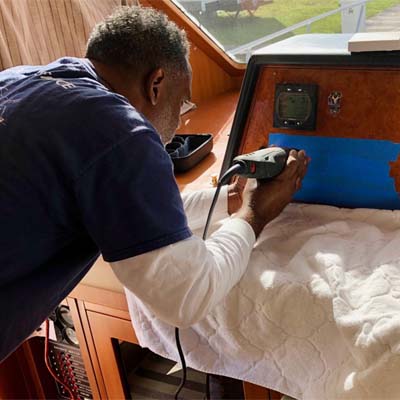 Ray McClue from YEP prepares the instrument panel for the DSP5000 control station.. 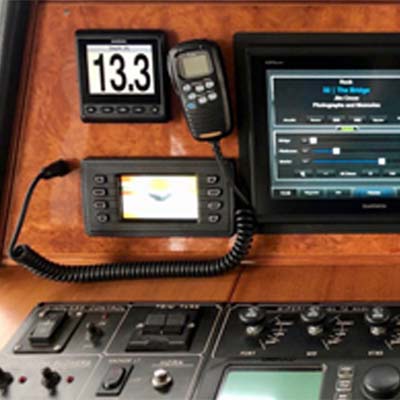 Finished panel where the WESMAR Wave-Smart 3-Axis Gyro is put into action to provide smooth sailing. 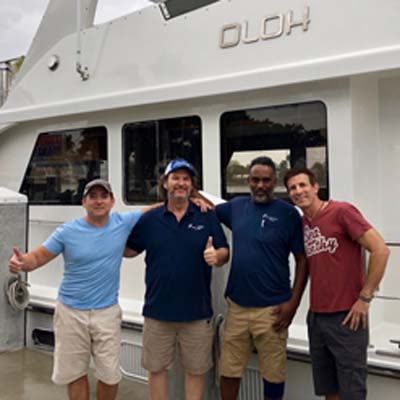 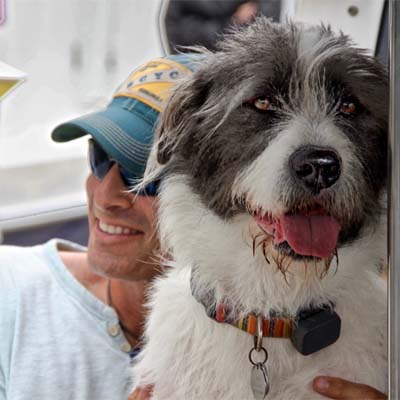 A.J. relaxes with his happy and relaxed first mate, Jasper!