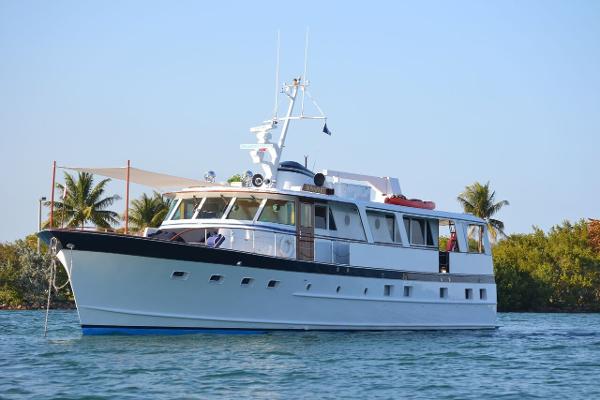 Gary Sorenson is the owner of Marine Control Systems out of Franklin, North Carolina. Gary wrote is about one of his experiences while on a sea trial for a newly installed WESMAR fin stabilizer system he installed for one of his customers.

"As the owner of Marine Control Systems, I have spent years installing several brands of fin stabilizers in all kind of vessels, and through the years all brands make the claims that theirs is the best. I am now semi-retired and I would like to share my story, one that surprised me, as well as the captain who’s ship the system was on.

Some years ago, Wesmar came out with an upgrade to their existing stabilizer system that had a 3-axis gyro and a new panel so you could adjust all aspects of the controls. It was a 12K upgrade that was hard for some owners to swallow. A Captain I knew talked to his boss into the upgrade for his 68' Berger.

I drove to Ft. Lauderdale, FL and did the install. When I finished and was ready for sea trail, the seas at FT. Lauderdale inlet were 11 to 12 feet, it was cloudy with some rain. The Captain thought I was nuts to want to go out in those conditions, but I was needed up north and I figured, why not run the trial in the worst conditions?

As we started in the channel, I saw the Captain brace himself so to be able to stand on his feet when the boat broached. He stood and he waited. It never did. When we got inside the bay we both were dumbfounded about the effectiveness of the system.

After much discussion we went. The trip out was mostly up and down till we got out about 2 miles. I had the Captain turn to the North and we started getting some rollers. I made some adjustments in the WESMAR system and it was smooth sailing. Yes, we went up and down but the roll was all but stopped. I had him do a few turns to be sure all the adjustments were good and told him to take us in. As we started in the channel, I saw the Captain brace himself so to be able to stand on his feet when the boat broached. He stood and he waited. It never did. When we got inside the bay we both were dumbfounded about the effectiveness of the system. To the Captain the upgrade had greatly improved the stabilizers and was well worth the money spent.

I left and started North that afternoon, still marveled at the new improvements WESMAR had made to their system. I have not installed any of the newest stabilization systems but they claim the new ones are even better than the ones I’ve installed - maybe, it plays movies as I can't see how you can get better without hydrofoils to go over the top! "  — Gary Sorensen, Owner - Marine Control Systems

You can find Gary at his company Marine Control Systems in Franklin, NC
or contact him through his website at http://www.marinecontrol.net