“This sonar is the moon and the stars compared to what so many are using. Weak targets are detectable...” 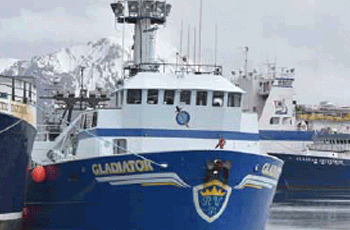 “This sonar is the moon and the stars compared to what so many are using. Weak targets are detectable. The Wide beam is a game changer.”

"For me the other brands of searchlight sonar were ineffective for looking out in front of the boat, but this new WESMAR HD860 is dramatically different," says Ed French, Captain of the 124-ft. Gladiator

“It is the most positive change in our electronics package ever. And it is a dramatic one! With it a person is more effective, a better judge of what’s near the boat,and can do a better job of putting the net on the fish."

"If there is a bulge or target on the bottom, WESMAR’s beam stabilization allows you to see it. It works very well; it’s a big deal.”

“The wide beam has the best detection of the small schools on or near the bottom. Better than anything I’ve seen. It will show you very small schools near or on the bottom that are not detectable on narrow beam. With 300 fathoms between the center of boat and bottom the ability to expand the picture is a wonderful tool."

"It’s taken a long time for the Bering Sea fishery to understand the importance of sonar. This season withall the fish it’s like it used to be, but those days are essentially gone," says Captain French. He says "today companies know the value of WESMAR sonar. The successful use of the HD860 in the whiting fishery last year on the Oregon Coast created a lot of interest," said Captain French.

"WESMAR’s new, precise active stabilization is the result of many years of providing equipment to thecommercial fishing fleets of the world and listening to what the captains want," says WESMAR President Bruce Blakey.

A precision electronic gyro with a dedicated computer module is in the HD860 soundomes, so when the transducers scan the gyro scans with it. Corrections are made in the exact direction the transducer is looking, keeping the sound beam on target. The WESMAR gyro runs 100% of the time.

"With conventional stabilization, even slight beammovement can be significant at extreme ranges, possibly hundreds of feet up and down. This makes fish location difficult except at close range", says WESMAR.