Blast from the Past - 1966 Newspaper Article Surfaces

A story submitted about a story by Dan Small - a third-generation fishermen in New Brunswick, Canada.

Dan Small is a third-generation fishermen in Grand Manan, New Brunswick. He uncovered this 1966 newspaper article about his grandfathers boat, the 62' BRADLEY SUZANNE 11, and how his grandfather, Burton Small,  pioneered the use of WESMAR sonar systems in the Bay of Fundy off Yarmouth. That's over 50 years — and today in 2018, we're still helping fishermen see more and catch more!  Read the original article below.

Burton Small from Grand Manin Island, New Brunswick, on the east coast of Canada, has been purse seining with the help of WESMAR scanning sonar for over 10 year and praises its reliability and ease of operation.

Captain Small pioneered the use of the WESMAR sonar in the bay of Fundy off Yarmouth, New Brunswick back in 1966. HIs vessel, the 62-foot BRADLEY SUZANNE II, was the first on the east coast of Canada to use WESMAR. Since then most of the 60-100-foot class fishing vessels have followed suit by installing WESMAR scanning sonar.

As the WESMAR was adopted, fishing success increased. "I noticed," said Small, that the fishermen who hadn't been too sucessful before installing sonar, improved their fishing with the use of WESMAR."

A veteran fisherman of 27 years, Captain Small uses the sonar to establish the location and size of the herring schools, and to monitor the netting once a good school is spotted. During the netting operations the movement of the fish is constantly watched on the sonar screen so that the maximum quantity of fish is caught.

Small also uses WESMAR sonar to determine the texture of the bottom. By knowing the condition of the bottom, Captain Smalll is able to manuever his net around obstacles that might otherwise damage his gear.

According to  Captain Small, many of the other purse seiners in the Bay of Fundy depend heavily on WESMAR scanning sonar. He estimates that 90% of the seiners ther now have WESMAR sonar aboard their vessels. 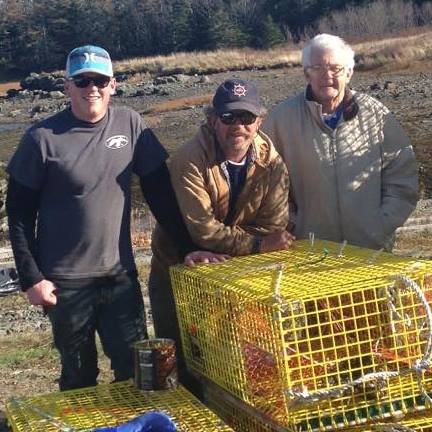 Shown Above: From the left Dan Small, Bradley Small and grandfather Burton Small on the right.