We hit 15 ft seas, and the WESMAR Stabilizers smoothed the roll to almost nothing

Paul Reyff, Captain of the 94-ft Motoryacht BELLISSIMA talks about his WESMAR stabilizers 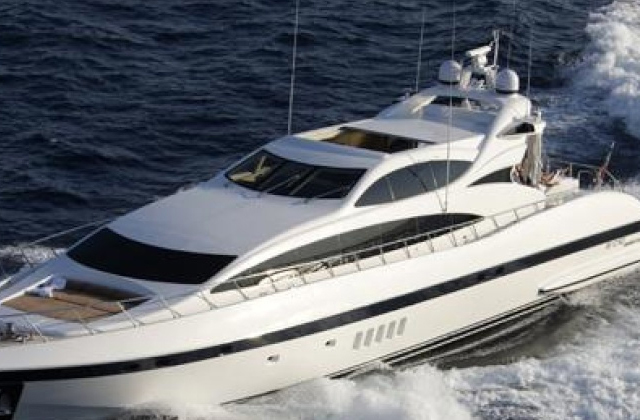 Between Panama and Honduras on the Atlantic side, we ran into powerful trade winds and hit seas up to 15 feet.

"Changing weather reports left us extremely vulnerable and the WESMAR stabilizers were a Godsend. We were in powerful trade winds for a day and a half and when reducing our speed from 18 to 8 knots the stabilizers smoothed out the roll to almost nothing.

Cruising on a 94-foot yacht designed and built by world-renown shipyard Ferretti brings the expectation of extreme comfort with its luxurious salon, its futuristic pilothouse, and sleek flybridge; an engine room filled with cutting edge technologies, staterooms appointed for comfort and calm travel, to wondrous spots around the globe, all the while cutting an impressive swath through deep blue waters, with nothing to do but enjoy the experience!"

Paul Reyff, as experienced a Captain as you’ll find, tells a story of high winds and rough seas, that not even a yacht as well equipped as the elegant Bellissma wants to endure without a WESMAR Roll Fin Stabilizer system.

‘We hear such stories frequently,” said WESMAR Vice President Bob Sentz. “An unpredictable change in weather turns a luxurious cruise into a harrowing experience, with bouncing, rolling, churning seas, china and crystal flying out of cupboards, seasick passengers, frightened children, alarmed adults, strapped down sea toys beating fiercely against the decks and flybridge, and water splashing over the bow.”

“No yacht regardless of pedigree is immune. It is the reason so many install WESMAR’s Digital DSP4800 series Roll Fin Stabilizers. They have the power to restore comfort immediately at anchor and underway. No waiting for start-up or shut down. You turn them on and they are ready to go.” says Sentz.

The BELLISSIMA was built in 2002 and purchased by its current owner in 2009. This beautiful boat has 4 guest staterooms and 2 crew staterooms; it is used by the owner for entertaining family (including children) and friends. Comfort and safety are important. “Before the WESMAR stabilizers were installed, we experienced quite a bit of rolling particularly from beaming seas. Now, with the WESMAR’s that is minimal” said Captain Reyff. The one change was to install the WESMAR stabilizer systems.

The BELLISSIMA is homeported in San Francisco, and she cruises in both Pacific and Atlantic waters. Captain Paul is not only a retired US Navy Captain but also a USCG Unlimited Master in the Merchant Marine. He has skippered this motor- yacht in both the Atlantic and Pacific oceans. On the Atlantic side in Florida waters, throughout the Caribbean islands and the Yucatan Peninsula; after transiting the Panama Canal to all major ports-of-call along Pacific waters as far north as Desolation Sound in Canada, including some favorite spots as Chatterbox Falls on the Canadian Sunshine Coast, and to resorts such as Roche, Friday Harbour, and Rosario in the US San Juan Islands with stops in the beautiful northwest cities of Victoria, Vancouver, and Seattle.

“The WESMAR stabilizers have increased our use of the yacht in marginal weather--we rarely delay our sailings. We’ve gotten underway in most weather conditions, and with the WESMARs have experienced a very stable ride,”

said CaptainPaul. “During America’s Cup races in 2012-1013, when San Francisco bay waters became too rough to race, BELLISSIMA remained stable and comfortable among the 300-400 spectator boats. The other boats were getting tossed around, and during that time the Coast Guard requires you to keep moving all the time because of the wind and tide. It is a crowded bay with lots of boats. We were the most stable of the boats there.” said Captain Paul.

Currently in Florida, BELLISSIMA will return to San Francisco in two years. In the meantime, Captain Paul says trips are planned to the Bahamas where the owner has a permanent berth in the premier resort Albany.

“We have never had one problem with the WESMAR stabilizers. They are very reliable.”

The installation of the WESMAR Roll Fin Stabilizers was done by WESMAR’s premier dealer Yacht Equipment and Parts (YEP) out of Ft. Lauderdale, Florida. YEP has been selling, servicing, and installing WESMAR equipment for 20 years.

“I can give YEP the strongest endorsement. They did a very good job. Kept to the schedules; service was excellent, everything was on time and the pricing was good,” said Captain Paul Reyff.