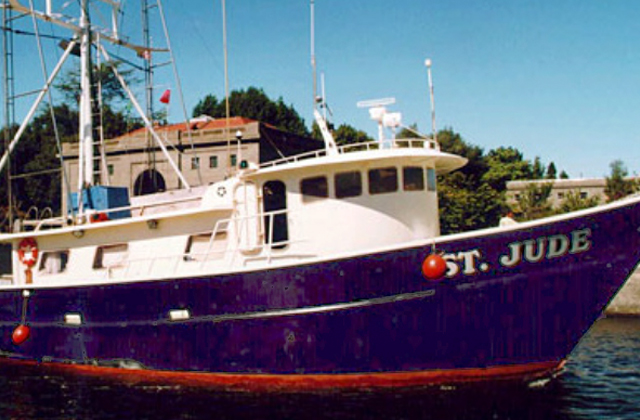 The St. Jude fishes with WESMAR’s Model HD860-160 kHz with 8-inch soundome, a system with electronic stabilization that holds the sonar beam steady even in rough seas, adding effective distance and increasing search coverage. “There are few sonar of its caliber,” says Captain Malley.

The albacore caught by this 95-foot-troller are handled with incredible care. The fish are individually caught on hooks and lures and each fish is landed and handled individually on a cushioned platform to prevent bruising. Each fish is rinsed, processed and put into the on-board blast freeze in the shortest possible time. “Our freezers are oversized and each day's catch is limited so that rapid freezing is ensured,” says the www.tunatuna.com website where people can order St. Jude Albacore.

The popular St. Jude brand canned albacore and fresh steaks bring comments like: ‘Picked up a few cans at Ballard Farmers Market about a month ago. Come to find out, this is what canned tuna is really supposed to taste like. I would have never guessed and I'm pretty sure it's all I will want to eat from now on.’

Captain Malley says efficiency is a key factor to the vessel’s success and the way he remains efficient is to fish when the delicate balance between fuel prices and the price of fish are in sync. “That determined, we rely on the sonar so we do not waste valuable cruising time and expensive fuel searching for activity that indicates fish. In that way, we are sonar dependent.” “I’ve used sonar for some time. We had an earlier version of WESMAR sonar and it was very functional. With any sonar, there is a learning curve...once my captain became familiar with the 860 he liked it. We find that the more people using it the more help a person get out on the grounds."

"We were high boat in the South Pacific this year...the sonar and my captain are a good combination. I credit the two of them.”

Captain Malley has fished for 34 years starting in Sitka, Alaska. The FV ST. JUDE is his third boat, and it is the boat he and his wife Joyce fished and lived aboard for 12 years before starting a family and starting the business to market their own catch. Today St. Jude operates with a hired captain and a crew of four.

The FV ST. JUDE and WESMAR have quality in common. WESMAR’s sonar systems, perfected over nearly five decades, provide necessary underwater vision for fishing operations around the world. They are well known for saving valuable search time. "With the HD860’s electronic stabilization even slight movements of the beam can be significant. At long ranges the beam can possibly move hundreds of feet up and down, making fish location difficult except at close range,” explains Bruce Blakey, President of WESMAR. By limiting this bounce, the effective sonar range is extended, and a wider search area can be achieved.”