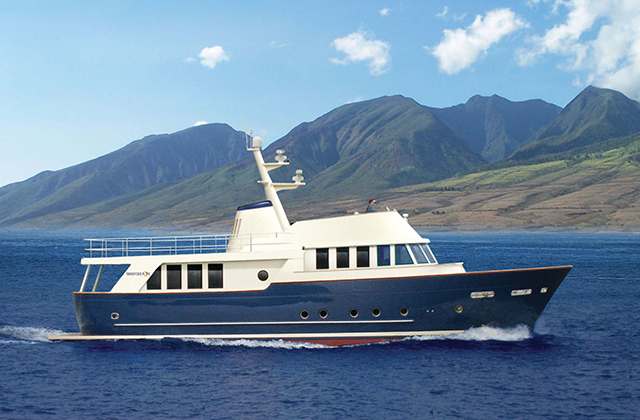 The peace of mind offered by a ‘Get Home’ system has been well documented. Boat owners like to know they have backup should they lose their engine.

WESMAR’s APU Auxiliary Propulsion System,* popularly referred to as a ‘get home’ system uses hydraulic power from the vessel’s generator to drive the propeller shaft, to get you home. The compact, rugged design of the APU has caught the eye of customers around the world.

A story reached us recently from our Technical Team Specialist in China, David Yen, who reported an amazing 4.5 knot speed during sea trials of the WESMAR APU, Central Hydraulics and Roll Fin Stabilizers on a 60 foot Trawlers series Queenship Yacht.

Yen reported that using a hydraulic pump powered by a 20KW Genset, the APU achieved a boat speed of 4.5 knots. The boat, recently commissioned, is currently on its way to the West Coast of the U.S. and will be delivered to its new owner in February.

The elegant 60-foot Queenship was built in China by Hershine Marine and the WESMAR APU, Central Hydraulics and Stabilizer Systems were installed at the factory. Adding the APU only involved an additional valve on the Central Hydraulics.

The beauty of the WESMAR’s new APU is that it can be operated right from the bridge by simply turning the key and using the proportional joystick for forward and aft propulsion.

Once the system is engaged with the key lock at the helm the system is activated and you are immediately in control and underway. No need to visit the engine room at all.
It is highly desirable for many other uses as well, such as maneuvering while sight-seeing with little cost in fuel, quiet operation for late night and early morning departures, quiet trolling speeds for fishing. What has not been widely reported is that the speed provided is impressive as well. In addition to back up safety, imagine the fuel savings in using the generator to propel the boat when high speed is not necessary.